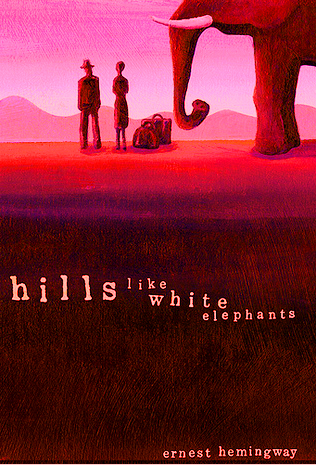 “Hills like white elephants” is a short story by Ernest Hemingway, a well-renowned author for writing fiction. He is a decorated writer, having won the Nobel Award for Literature in the 1950s, among other prominent prizes. He authored other novels include “A Farewell to Arms” and “The Sun Also Rises.” In this story, first published in 1927, Ernest showcases his Iceberg Theory skill, whereby the words in the publication are only a mere segment of the whole story. The central concept in the novel is abortion, but surprisingly throughout the book, there is no mentioning of the term.

The script kicks off in Spain as a man named America is having a drink with a lady, Jig, in a station bar as they wait for the train. These two characters are a couple wanting to take a train to Madrid (Sustana). Here the author gives a clear picture of the setting as he even goes further to describe the appearance of the surrounding. As the American and Jig converse were are made to understand that there are remarks that Jig utters, and the American does not take them well, but they continue enjoying each other’s company.

As the couple takes their second round of drinks, the American starts talking about how a particular operation is not much of a big deal. It can be noted that from this point onwards, the lady becomes less talkative, and the man does a lot of convincing. He suggests how their intimacy will go back to normal once they are through with the operation. All through, it is clear the American wants Jig to undergo the operation, terming it as an “awfully simple” thing. The author does not directly reveal that Jig is pregnant and the American is not ready to be a father. However, we arrive at such a conclusion by following the couple’s conversation and sympathizing with what both parties say.

Although some readers might enjoy this writing style, others have a hard time and have to reread the story more than once to get a grip on what is going on. The story is structured in a manner that assumes readers are familiar with the characters. To understand that the operation being spoken of is abortion, one has to think out of the box. Hence while reading “Hills like white elephants,” the audience is brought on the same ground as the author, who only seemed to have eavesdropped on Jig’s conversation with the American.

Another outstanding aspect of this story by Ernest is how he characterizes the lady as a sympathetic person who takes the matter of abortion to not only involve her interests. On the other hand, the boyfriend is portrayed as self-centered and is willing to evade responsibilities at whatever cost. The story’s title in itself is symbolic; the American compares the undelivered baby to an elephant, and it would be a burden for them to have it.

In conclusion, the story would have been a bit less fascinating if the author directly pointed out that the central concept in the plot was abortion. The use of the Iceberg Theory captures the audience’s attention and glues them to the story as they try to figure out what Hemingway is addressing.

Get a Quote
Order Your Paper